Whenever the word Monarch is used, many of is in Britain might often think only about our own kings and queens. It is easy to forget that most European countries also had monarchs at one time or another, and their stories are often much more eccentric than our own.

One of the more peculiar collections of monarchs are those that rules over Poland – known in England by its Latin name of Polonia until modern times. The information from this post is taken from those sections of Moses Pitt’s Atlas of 1681 that deal with Polonia.

The first recognised Monarch of Polonia was the man who created the country, Prince Lechus the First (700-740). A famous myth named the “Lech, Czech and Rus” refers to three Slavic brothers, who appear together in the Wielkopolska Chronicle, a medieval account of earlier Polish history. The myth states that the three brothers went on a hunting trip, and following different prey, travelled and settled in different geographical locations. Lech in the north, Czech in the west and Rus in the east. Prince Lechus famously built the city of Gnesna (Modern day Gniezno) in a place where he found the Eagle’s nest that he had been hunting. The city receives its name from the polish word Gniazdo which translates as nest, and is the reason why even to this day Poland’s coat of arms is emblazoned by an Eagle. There is no evidence of his offspring, if he had any at all, amounting to anything.

In absence of a natural heir, the people of Poland choose twelve palatines or governors for rulers in the ‘lame duck’ period between monarchs, as there were twelve provinces within Poland. However, the people still desired the safety of a monarchy, and so persuaded Cracus, a man of great fortune, to take control of the government, of which he did with a singular prudence and success. Upon his demise, the people of Poland built a new city in remembrance of him, which was named as Cracovia (Cracow) and stood as the metropolis and capital to the kingdom until 1596.

After Cracus’ death, his younger son, Prince Lechus the II reigned, but only after murdering his elder brother in order to make way for himself. Once the murder was discovered, he was disposed and banished, leaving in 750 his sister, Princess Wenda, to take over. Wenda chose to rule alone and not be a wife to a king. In doing so, she refused the marriage, through both treaty and force of Ridigerus, a German prince. Ridigerus was so ashamed that he committed suicide, for he could not bear the fact he was rejected so strongly by a woman. Following this, in order not to not taint her own honour at having driven a man to kill himself, she threw herself from the bridge at Cracow into the Weissel. How this retained her honour I will never understand!

One more there was the absence of any monarch, and so the twelve palatines stepped in again, until a goldsmith by the name of Premislaus or Lescus the First (760-804 ), was created Prince after he had, by an unusual stratagem, defeated and overthrown the enemies of Poland – both the Hungarians and Moravians. How on earth a common man managed to do this is lost to history and another example of the wonders of the mankind. He died without issue.

Four of the twelve Palatines of Poland, from Sebastian Munster’s Cosmographia of 1554. Image copyright the Dean and Chapter of Worcester Cathedral (UK)

Lescus II (804-810) came to power in a rather odd fashion, through a ‘Race for the government’ designed by the Polish nobility. One of the competitors set traps which disabled all of horses except the perpetrator. Upon being discovered when he was the only competitor with a horse left, the spectators tore the cheat limb from limb. Lescus II, a poor obscure man, who out ran the rest of the competitors on foot, was by popular applause made Prince of Polonia. Throughout his reign, Lescus kept the clothes he wore that day to remind him of his humble beginnings.

Then we are presented with a string of monarchs who have no real details except their names: Lescus III ( 810-815 ) and Popielus I ( 815-830 ), all of who due to their short reigns, we presume died young.

Popielus II (830-843) met a rather gruesome yet vaguely humorous end. The people said, through God’s will, that Popielus was punished for murders he had committed in poisoning his own children. He was hoping he might unite the Slavonian principalities under his own Dukedom. This act of hubris and arrogance led to his judgement and punishment by God; he was reported to have been eaten alive by mice. The technicalities and logistics of how this event transpired are unknown, but it seems a fitting end for someone who poisoned his own children so he could get ahead – eaten by the very creatures we automatically place below us as filth. 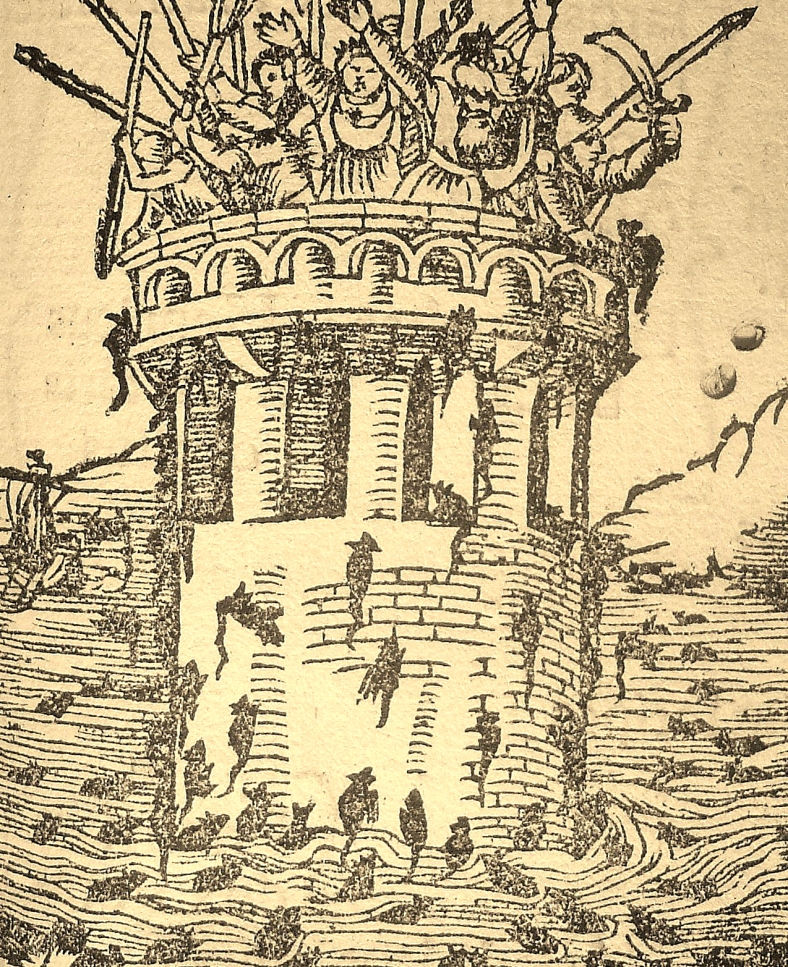 Popielus (or Popiel) and his entourage are devoured by mice, detail from Munster’s Cosmographia, 1554. Image copyright the Dean and Chapter of Worcester Cathedral (UK)

Mieceslaus (964-999) was famous as he was the first Christian Prince of Poland. He founded the two Archbishoprics of both Gnesna (Gniezno) and Cracovia (Cracow). Mieceslaus actions were influential, but his story is bizarre. Mieceslaus was born blind and on his seventh birthday banquet where we would receive his name, he regained his sight. It was a miraculous recovery and impeccable in timing, which may explain his devotion to religion, as he had been witness to and beneficiary of a miracle.

Boleslaus I (999-1025) was the first officially recognised King, receiving his title from the Emperor of Germany; Otho III. All previous men in power were hereby considered to be only Dukes or Princes and not official kings.

Mieceslaus II or Casinirus the First (1025-1059) was shunned by factions due to his mother’s ill government. He travelled across a large proportion of Europe, through Hungary, Germany, Italy and lastly France. In his travels, he became fiercely religious, as well as deacon in the Benedictine convent at Cluny. Because of this, he was invited back to the crown by the Poles.

Boleslaus II the bold (1059-1082) was famous not only for his eponym, but for losing the title of King for his successors for 213 years. He was deposed by Pope Gregory as he murdered Stanislaus, the Archbishop of Cracow, as he was officiating at the altar.

In the first 60 years, Poland had four rulers, one inter-family murderer, one banishment, two suicides and two historic cities being built which stand to the present day, and had seen two standing of palatinate governance between periods of personal rule. In the following 322 years, the Polish monarchy had 16 kings, including a goldsmith promoted to the office for overthrowing both the Hungarians and the Moravians, a power crazy Duke who poisoned his own children and was eaten by mice, an obscure man who won the right to be a Prince by winning a horse race on foot, a Prince who’s blindness was cured by being officially named at a banquet. In its earliest days, Poland had its fair share of tragedy, love, violence, revolution, murder and depositions. Not bad for such a newly formed kingdom!