How often we find our research is guided by the hand of serendipity. Whilst researching elements of the history of the Archbishopric of York in Worcester Cathedral library it gradually became clear to me how often for many senior clerics their path north meandered through Worcester. As a Yorkshireman, who has lived in Worcestershire for over thirty years, I was drawn to this fascinating link, which presented itself to me through a detailed examination of Francis Drake’s Eboracum or the History and Antiquities of the City of York, published in London in 1736. Time and again, when reading the brief histories of the Archbishops of York, it became apparent that Worcester had played a significant part in preparing them for that office. 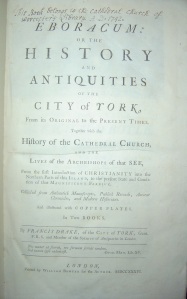 The title page of the History of York

We can go as far back as Wulfhere, the thirteenth Archbishop of York, to understand the significance of Worcester to the See of York. Wulfhere was Archbishop of York from 854 to 900, during the turbulent times of the first Danish invasion, when the Danes were driving all before them with fire and sword. The two kings, Osbright and Ella, were killed in the city, but the Archbishop escaped and took refuge under the protection of Burged, King of Mercia. The following year the Danish King Ricsius, having been converted to Christianity, recalled the Archbishop and placed him on his throne. But the earlier ravages had so spoiled the profits of the Archbishopric that it was then, and for some time after, augmented with the commendam (the tenure of a benefice) of Worcester.

The choir end of York Cathedral

In 960 Oswald was preferred to the Bishopric of Worcester by Dunstan, Archbishop of Canterbury. Here he built the church dedicated to St. Mary, and placed monks there. About this time the See of York became void. King Edgar, who was keen to engage a fit person to take care of these “rude and barbarous northern parts”, offered it to Oswald, who seemed to decline the acceptance as he was loath to forsake Worcester. The King was content that he should hold both. Consequently Oswald remained Archbishop of York for 21 years, and died suddenly in Worcester in February 992, reputably having foretold his own death the previous day.

Oswald was succeeded by Adulf in both his Sees of Worcester and York. Adulf died in May 1002 and was buried in St. Mary’s Church Worcester. His successor, another Wulfstan, was allowed by favour of King Cnut to again hold both the Sees.

Less fortunate was Aelfric; he missed holding the Bishopric of Worcester (as well as York) as three of his predecessors had. In a possibly apocryphal tale he is reputed to have urged King Hardicanute, with whom he was a great favourite, to set the city on fire “which was done to the no small damage of the citizens”.

Ealdred took the Archbishopric of York in 1061 upon leaving the Bishopric of Worcester (1046-61). He then prevailed upon King Edward to let him hold Worcester, as four of his noble predecessors had done. In 1050, whilst Bishop of Worcester, Ealdred undertook a pilgrimage to Jerusalem; a thing which no bishop of this realm ever attempted before him. A story attributed to William of Malmesbury is illuminating. Urse, Sheriff of Worcester had built a castle to the prejudice of the neighbouring monastery, for the ditch of the castle took off part of the churchyard belonging to the monks. Having admonished him in writing, Ealdred went to Urse in person, and challenged him as to whether it was by his orders that this encroachment was made. With Urse not denying it, Ealdred said “highest thou Urse; have thou God’s curse”. This curse, according to the author, seemed to take effect, as Urse died soon after.

In 1214 Walter Grey was Bishop of Worcester and King John’s chief councillor. The King was opposed to Simon Langton (the Archbishop of Canterbury Stephen Langton’s brother) being elected to the See of York. King John, who at that time was on good terms with the Pope, had the election set aside, and Grey was admitted by the Pope, though at a significant cost to himself (reputedly the sum of ten thousand pounds sterling). This effectively ruined him, and he was obliged to live in “the most penurious manner” in order to retrieve it.

After distinguishing himself at court, in July 1347 John Thoresby was appointed Keeper of the Great Seal by King Edward III, and in the same year consecrated as Bishop of St. David’s. From there he was translated to the Bishopric of Worcester (1349-1352), and in 1352 was elected to York.

The interior of the Chapter House at York

Nicholas Heath was a former almoner to Henry VIII. In 1539 Heath was consecrated Bishop of Landaff, and the same year removed to Rochester, where he stayed for around four years before being translated to Worcester, where he was Bishop from 1553 to 1555. In the time of Edward VI, he was deprived of the Bishopric of Worcester for refusing to take the oath of supremacy, but Queen Mary restored him again at the beginning of her reign, and also made him Lord President of Wales. He was appointed Archbishop of York in 1555.

Edwin Sandys was Vice Chancellor of the University of Cambridge when Lady Jane Grey was proclaimed queen. He was subsequently imprisoned by Queen Mary for preaching a sermon in defence of Jane’s title. After a year he was discharged and fled to Germany, where he lived for the rest of Mary’s reign. Returning to England he was soon distinguished by Queen Elizabeth. In 1559 he was consecrated Bishop of Worcester (1559-1570), and in 1570 removed to London, and then translated to York where he was enthroned by proxy in 1576.

There are also instances of eminent sons of York finding positions of status in Worcester. For example, under the patronage of King Charles II, John Earles was consecrated Bishop of Worcester (1662-1663) after the death of Dr. John Gauden.

Another reputed son of York, Dr. Richard Eedes, became Dean of Worcester (1597-1604). Eedes was a great admirer of Toby (Tobias) Matthew (Bishop of Durham 1595 to 1606). When Matthew was removed from Christ Church, Oxford to the See of Durham, Eedes agreed to accompany him on a day’s journey. However he was so enticed by the sweetness of the Bishop’s conversation that he decided to make the whole journey to Durham with him. On arrival he wrote an account of their journey in Latin verse, entitled Iter Boreale . As they progressed through Yorkshire during a very dry summer, they crossed the bridge at Tadcaster, and Eedes was moved to write:

The muse in Tadcaster can find no theme

But a most noble bridge without a stream

But when the doctor returned in the winter, he altered his opinion:

The verse before on Tadcaster was just,

But now great floods we see, and dirt for dust

A foretaste perhaps of the winter floods of 2015, when the old bridge at Tadcaster was swept away.

York and its surrounding area

Down through the ages we can witness a fascinating relationship between these two noble English cities. And now, as a long-standing resident of Worcestershire, but with my roots and heritage in Yorkshire, it warms my heart to acknowledge these historic links between York Minster and Worcester Cathedral.