Take a walk around the northern prospect of Worcester Cathedral today and we witness the Cathedral standing serene but still at the heart of the city centre. The city’s urban encroachment extends as far as the recently re-modelled square, and no further. The Cathedral sits amidst a modest green oasis, marked only by an occasional ledger stone, and the war memorials. During recent road works, significant archaeology revealed the remains of early street plans dating back many centuries. However, these streets, and the present road layout, stopped shy of the Cathedral precinct itself. But it was not always so.

Stepping back into the early-nineteenth century and far beyond, we would have witnessed a very different scene. Prior to the late eighteenth century the Cathedral grounds were accessed directly from the early houses by a number of paths across the green to the north porch, and to St Michael’s church, via three main entrances or “grates”. The first of these separated the end of the High Street from the Cathedral’s enclosed sanctuary. It was called College Grates and was demolished in April 1784. The second entrance was a lych gate close to the old Punch Bowl pub. This lych gate was demolished in the mid-twentieth century. The third entrance was St. Mary’s steps by Edgar Tower. Until 1843, when it was sadly demolished, the church of St. Michael in Bedwardine (as it was known) stood upon the ancient Cathedral cemetery or burial ground, cheek-by-jowl with the Cathedral itself. 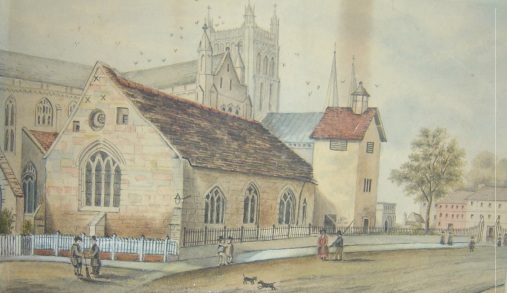 The first remaining record of the church dates from 1268, but it is entirely possible that it could have been established much earlier. Religious tradition at the time dictated that any chapel or church, situated within a burial ground or cemetery, would have an alter dedicated to St. Michael, for in the early catholic faith St. Michael (or Michael the Archangel as he was commonly known) was the angel of death, tasked with weighing the souls of the dead in his scales, and carrying those worthy ones to heaven.

The parish of St. Michael the Archangel (more commonly known as St. Michael in Bedwardine) encompassed the Cathedral churchyard, the Bishop’s Palace and the old charnel-house to the north, and the castle and its hill and precincts running south down to the river Severn. In 1779 it was recorded as containing “99 houses, and 622 inhabitants”. One suggestion is that the name Bedwardine was derived from the Saxon words beod and worthig meaning table-farm or table-field, telling us that the parish had a prime responsibility to provide bread (and possibly other provisions) for the monastic refectory. However, another suggestion in Mawer and Stenton (see below) is that it might also mean Beda’s enclosure. The medieval church served as the parish church and the cemetery chapel to the Cathedral.

In the medieval period and beyond, much of the northern prospect of the Cathedral was obscured by a conglomeration of buildings, the most significant of which were the Cathedral’s leaden steeple or bell tower (the lead was stripped from it in 1648, and the rest demolished later) and St. Michael’s church, with its accompanying rectory house. The historian John Noake tells us that next door to the church stood the sacrist’s house “from which the watching window in the north choir aisle of the cathedral remains”. This building was demolished in 1731. The surprisingly cluttered area around the Cathedral is summarised well by Noake, where he refers to the position of St. Michael’s and “many other tenements, chiefly of poor appearance” which “filled up the spaces between the little church and the cathedral”.

We have few reliable images of the church itself, and those that do survive paint a tantalising picture. In Valentine Green’s book we see a sombre engraving of the church showing its curious tower (a later 17th century addition), and an anonymous watercolour painting from 19th century survives in the collection of the Cathedral presented in October 1913, as well as a tiny engraving from 1807. Green tells us, from his 18th century perspective, that the ancient church, having recently undergone a re-fitting, had been rendered “extremely neat, decent, and commodious”. It seems the re-fit included the installation of, amongst other things, a new alter-piece, pulpit, gallery and pews, all of which gave it “altogether a very respectable appearance”. 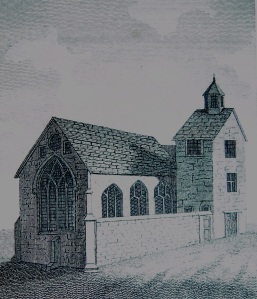 Prior to this, following the Reformation, we know alterations were made to the church (evidenced by payments in the church accounts), including removal of the altar and roof loft, and whitening of the walls. The reredos of painted alabaster was most likely broken up at this time, and several portions of it were re-used in necessary repairs. These fragments were discovered during the church’s demolition in the 19th century. Another lasting artefact is the bell of 1480, with its inscription of “Inclicte Paradisi Praepositi”, which now resides in the Cathedral cloister.

Early 19th century illustrations show a stone-built church with what appear to be Decorated and Perpendicular style windows, attached to which is the 17th century timber-framed tower with a pitched roof and turret. It seems the tower’s function was partially to provide lodgings for the clerk or sexton.

With the exception of the period following the Reformation, the little church of St. Michael suffered most as a consequence of the English Civil War, and in particular during the immediate aftermath of the battle of Worcester in 1651, where Charles II suffered a resounding defeat. As a royalist city that refused to surrender to the Parliamentary forces, Worcester could expect to suffer as a consequence of the laws of that time. The city was extensively ransacked, and St. Michael’s was not spared. During the sacking of the city the church lost most of its parish goods, including the communion plate, its copy of the “Great Church Bible” and its register. Happily the latter resurfaced at a later date, and still exists today. The parish accounts tell us that only the communion table, the bells in the tower, and the benches and book desks survived the tumult. They also tell the tale of the church being used, as many others in Worcester were, as a temporary prison for the common soldiers taken prisoner at the battle. In the weeks that followed the churchwardens of St. Michael’s had to engage a man to carry away the litter that the prisoners lay on, and to clean the church, at a total cost to the parish of 8d.

The church of St. Michael’s ultimate demise, as referenced above, came in 1843 when it was demolished. Prior to this a replacement church of the same name was built on the opposite side of College Street, but this in turn fell into disuse and was itself demolished in 1965, along with the Punch Bowl pub and many early houses, to make way for the Lychgate shopping precinct and Giffard Hotel.

The History and Antiquities of the City and Suburbs of Worcester by Valentine Green. London, 1796.

The Monastery and Cathedral of Worcester by John Noake. London, Longman. 1866.

The Place-Names of Worcestershire by A. Mawer and F. M. Stenton with F.T.S. Houghton, Cambridge University Press, 1927, p.89