When we think of great medieval cathedrals it is easy to forget that they take a huge amount of regular preservation and repairs. To get a flavour of what that meant in past times, Worcester Cathedral is fortunate to have some surviving detailed accounts from the seventeenth century. 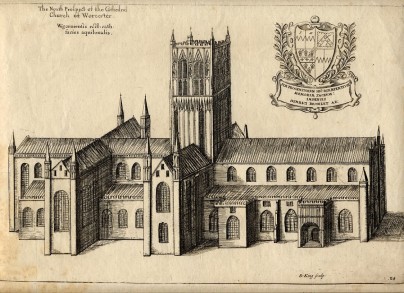 In 1610 and 1611, Canon Dr. John Archbald, Treasurer of Worcester Cathedral, was in charge of the Cathedral’s expenditure. Archbald had been educated at Cambridge University. From 1607 he was a Canon, or prebend, of Worcester Cathedral, and was also a chaplain to King James I. We don’t have any diary of Archbald and even his monument has since gone. However, what he recorded sheds light on Cathedral activity at the time.

Extract from register A26, Cathedral accounts for 1611. Image copyright the Dean and Chapter of Worcester Cathedral (UK)

Mostly of course, the Cathedral was a place of worship, preaching, music, learning, and charity, but a visitor to the Cathedral at the time would also have been struck by the level of work constantly undertaken by a team of stonemasons, carpenters, plumbers, glaziers and other workmen who carried out crucial maintenance. The carpenters, led by Francis Biddle (or sometimes Bedell, had to repair the bell frame in December 1610. They were helped by Chadburne the Smith who made various items of metal work needed for the bell frame. Evidently there was a need to increase the number of bells that could be rung together. To make a new bell frame for four lesser bells, Biddle had to obtain trees from Eymore Wood. This was no easy task as, unlike in modern construction projects, the selected trees first had been floated down the river to the Cathedral. The carpenters and other workers of the Cathedral then had to physically haul the trees up from the Cathedral’s river gate. Once the timber had been prepared the carpenters then had to take out all the old timber that they didn’t want from the Cathedral tower, and store it in the ‘leaden steeple’. This steeple was a huge medieval bell tower that stood separate from the Cathedral on the north side, facing the High Street. This first part of the project was only finished on Christmas Eve 1610. 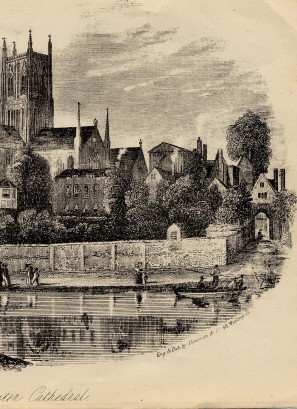 Engraving of the Cathedral river wall and river gate. Image copyright the Dean and Chapter of Worcester Cathedral (UK)

The team of carpenters, masons, and other craftsmen were far from finished. Henry Hornbee, the plumber – or leadworker – worked on the Cathedral tower, and above the quire. Walter Drew was busy repairing the Cathedral pavements and cloister walks which he finished on Christmas Eve. By February 1611, he led a team of labourers in repairing the quire vaults – in some cases actually pinning cracks that had appeared. Eleven days later the first of twenty cartloads of stone taken from the old monastic manor house at Battenhall were being brought to the Cathedral by Robert Walker of Whittington for repairs to the leaden steeple and Cathedral. March saw Walter Drew and his team then set about repairing the leaden steeple, and organize the delivery of four more cartloads of stone and building supplies. Whilst the mason continued with this, Biddle and his assistant worked on the timber in one corner of the steeple so that it did not collapse onto the stonemasons as they worked. 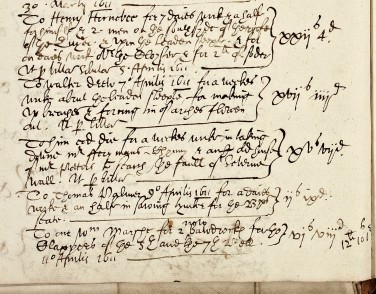 Extract from register A26, Cathedral accounts for 1611. Image copyright the Dean and Chapter of Worcester Cathedral (UK)

By April 1611, more leadwork was carried out on the south side of the roof of the quire, the cloister and leaden steeple by Henry Hornbee. Then for a week, Walter Drew filled in breaches in the steeple’s structure, and what Archbald described as “forcing in” of arches that had “flown out” of the same building. Then the canons called him to take down Canon Ferryman’s chimney and an old house of Canon Potter to look for a fault in the Cathedral wall by the River Severn. A week later, Drew and his men were back digging up Canon Ferryman’s garden to hunt down the fault in the river wall. Other work at this time included two new baldricks for the clappers of the 5th and 7th bells by a William Marsh. Francis Biddle and his carpenters worked on the Bishop’s throne, stairs to it and the seats in the quire. By late April, Walter Drew and his team were still repairing the stonework in the leaden steeple, and had to repair some sort of drain that they had damaged whilst digging around in Canon Ferryman’s garden. Drew and his masons then had to go up to Battenhall Manor to load eight more carts with stone to take back to the Cathedral.
William Marsh came back to the Cathedral on two more occasions that year to provide a new baldric for the great bell in the Cathedral on 25th May, costing 4s 6d and again on 16th July for repairing it, costing another 20d. It then took Edward Philpott another two days to set and hang all the Cathedral bells “in good order” according to Archbald’s account.

An interior view of the nave with the paving stones. Image copyright the Dean and Chapter of Worcester Cathedral (UK)

Hopefully, this has given a flavour of the typical tasks of the time. Without a dedicated cadre of skilled craftsmen throughout history, the Cathedral we all enjoy walking around wouldn’t be here today. Thankfully the various skills they knew are carried on today, although probably fortunately no one has to haul trees up from the river or load stone into horse drawn carts whenever some building work is needed.