In early 2015, prior to the renovation work on the library ceiling, we undertook a comprehensive stock-check of Worcester cathedral library. This was a stock-check like no other I’ve experienced. In addition to the “ordinary” (did I say ordinary?) shelved items on the open shelves (predominantly late 15th to 18th century books), it involved a comprehensive check of our outstanding collection of medieval books and manuscripts. As box after box was unpacked and checked treasure after treasure was revealed, blinking uncertainly in the unfamiliar light. 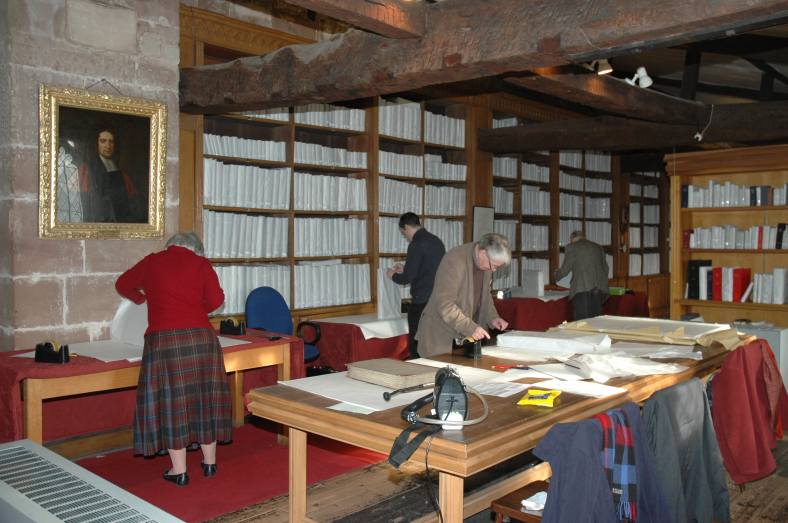 Staff and volunteers in their Herculean effort to inventory, wrap and move all the books in in the library in 2015. Image copyright the Dean and Chapter of Worcester Cathedral (UK).

. I remember one box especially. After several previous ones, containing mainly 12th and 13th century manuscripts, I opened this one expecting more of the same; another collection of Norman manuscripts, revealing fascinating insights into the business of the monastery. But as soon as I lifted the lid I knew this box was different. There before me, written on vellum in an entirely different hand, a much earlier hand clearly, lay a small and beguiling document of seemingly Anglo-Saxon pedigree. I sat for a while, this diminutive treasure in my hands, and pondered on its history, its provenance, not least its cultural significance. Then, with not a little apprehension, I hurried to the library catalogue to check its credentials.

This unassuming, yet beautiful, little document was the Uhtred Charter. It was written on 8th June in the year 770. That realisation was both exhilarating yet humbling. Here before me were set-out, in a beautiful contemporary hand, the details of a gift of land, transacted some twelve-and-a-half centuries ago. A gift of land which lay in what we subsequently came to understand as the diocese of Worcester, and as it happens, very close to my own home. 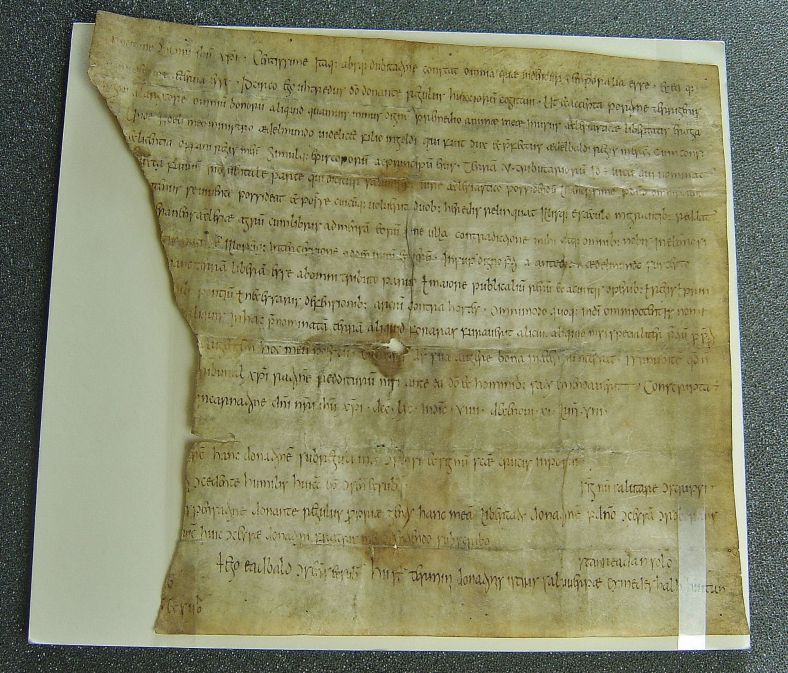 The Uhtred Charter. Image copyright the Dean and Chapter of Worcester Cathedral (UK)

In 8th century England the regional county system as we know it was yet to evolve. Indeed the country was yet to be unified under a single ruler. That part of England that we now recognise as the West Midlands formed one of the five administrative provinces of the kingdom of Mercia. Between 757 and 796 Mercia was ruled by King Offa. During his reign he consolidated and widened his rule, taking under his authority various sub-kingdoms, including one of particular interest to us here in Worcester, the Hwicce.

Hwicce was a tribal kingdom in Anglo-Saxon England. According to the Anglo-Saxon Chronicle it was established in 577, and subsequently became a sub-kingdom of Mercia sometime after 628, following the battle of Cirencester. The kingdom was assessed at 7,000 hides, giving it a similar sized economy to the kingdoms of Essex and Sussex. Although we are unsure of the exact boundaries of the kingdom, it is likely they coincided with those of the old diocese of Worcester, founded in 679-80. Indeed the early bishops bore the title Episcopus Hwicciorum.

In the early part of Offa’s reign of Mercia, Hwicce was ruled by three brothers, Eanberht, Uhtred and Aldred. Uhtred, who shares his name with our charter, was active in the kingdom from the 750s to 779. His position, whilst ruler of the Hwicce, was subordinate to Offa, to whom he owed allegiance.

So what exactly is the Uhtred charter? Well it sets out the terms under which a piece of land is gifted to a man called Aedelmund, one of Uhtred’s ministers. In summary it says:

GIFT with the consent of Offa, King of Mercia, and his bishops and princes, of land measuring five hides called … [name is illegible] next to a river on the eastern side called Sal … [name is partly obscured, but is believed to be Salwarpe] to be held by ecclesiastical law, and allowing Aedelmund to leave the property to two unspecified heirs, with reversion after their deaths to the church of Worcester, free from all tributes and services to the King and Prince, except for the construction of bridges and necessary defences against enemies.

The document was witnessed by several prominent dignitaries, including the Bishop of the Hwicci, and Cyndryd, Queen of Mercia. 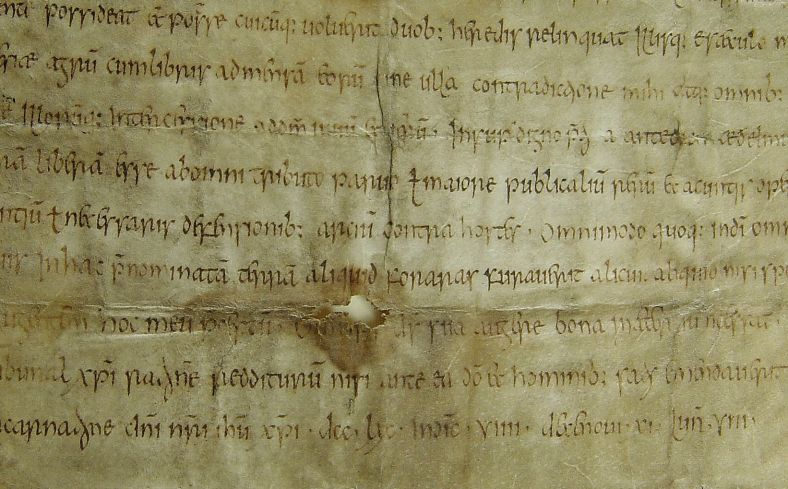 The Uhtred Charter. Image copyright the Dean and Chapter of Worcester Cathedral (UK)

In Anglo-Saxon England a hide of land was used as a basis for assessing the amount of food rent (feorm) due from a village or estate, and so was more a measure of value than a measure of land. In the case of our charter, five hides would have been a parcel of land sufficient to support five households.

What becomes clear, given the evidence of this charter, and one other surviving charter from the Hwicce, is the eventual passage of these lands back to the church of Worcester. The Uhtred charter specifies that this reversion back to the church should take place after the deaths of “two unspecified heirs”, i.e. after a period of three generations in total. Through this method the diocese of Worcester gradually took control of the majority of the surrounding area.

Transition of the land back to the church was not always a smooth process however, and in some cases pressure had to be brought to bear to retrieve it. Such an event is graphically illustrated in a passage in Hemming’s Cartulary (a manuscript collection of charters and other land records, collected by a monk named Hemming around the time of the Norman Conquest). In one enlightening passage, dating from around 1055 to 1058, Hemming describes the events surrounding the visitation of St. Wulfstan (whilst still Prior of the monastery) to Godwine, brother of the powerful Earl Leofric of Mercia. While administering the rite of the visitation of the sick and the extreme unction, the monks claimed the land at Salwarpe, which Godwine had possessed unlawfully:

For a certain Godwine, Earl Leofric’s brother, holder of that very estate, having fallen sick and having reached the end of his days, was anointed with oil by Wulfstan … Having had penance imposed upon him, he was accused by them of holding that land unjustly. He immediately recognized that the land rightly belonged to the church and – doing penance – surrendered to them the land, which he had held back for so long …

It takes little imagination to understand the likely reaction of Godwine’s heirs, or indeed Aedelmund’s (the beneficiary of the Uhtred charter). Resistance was more than likely, although eventually the lands were retrieved, and subsumed into the diocese of Worcester.

What a story a charter can tell.

‘St Oswald of Worcester 992-1992’ in Catalogue of Exhibition of Books and Manuscripts in the Chapter House, Worcester Cathedral, (3 August – 13 September 1992).